History: Patient with cervical carcinoma admitted in the ICU with urosepsis.

DESCRIPTION:
This is a frontal chest radiograph. (As a routine, prefer to say frontal rather than AP or PA as then the discussion could go tangentially!.. In this case of course this is a supine AP film as it is an ICU patient).

The medial end of the right clavicle is away from the sternum as compared to the left, denoting positive rotation in this radiograph. Hence, it is a Right posterior oblique view of the chest. (You can see another example explaining rotation here)

There is right upper zone consolidation collapse. The right transverse fissure is pulled up with the convexity facing up, along with tenting of the right hemidiaphragm. These features are suggestive of volume loss (collapse) involving the right upper lobe.
The positive rotation limits the evaluation of tracheal or mediastinal shift.
The right costophrenic angle is clear.

There is mild left hilar prominence, along with left lower zone obliterating the left costophrenic angle.
The cardiothoracic ratio is around 60% with evidence of left ventricular enlargement.

The tip of the right jugular line is in the region of the superior vena cava. The tip of the ET tube is approximately 4 cm proximal to the carina. Endoenteric tube is present but the tip is not visualized.

In the given setting of urosepsis, findings are consistent with an infectious etiology. Do note that if this was an OPD x-ray, an underlying right upper lobe malignancy should have been suspected.

The X-ray signs of collapse of a lobe of the lung are divided into direct and indirect ones.

A) DISPLACED SEPTA
It is the most direct and reliable roentgen sign of collapse.
Occasionally, septal shift may represent the only sign of collapse when then collapsed lung retains much of it’s air. The more rapid the onset of obstruction, the more complete the collapse and the greater the septal displacement.

B) LOSS OF AERATION
This sign should be accompanied by other signs of collapse to be valid.

C) VASCULAR AND BRONCHIAL SIGNS
Crowding of the bronchovascular markings serves as a direct sign of collapse and is often accompanied by spreading out and arcade like curving of the vessels of the adjacent compensatory lobe of the lung.

A) UNILATERAL ELEVATION OF THE DIAPHRAGM
Infrequently seen in RUL, RML or LUL collapse and even more inconstant in lower lobes collapse.
However, it may be secondary  to many other abdominal and thoracic conditions or just a normal incidental finding; so not very specific for collapse.

B) DEVIATION OF THE TRACHEA
This sign is commonly seen in upper lobe collapse and is infrequent in the collapse of the middle or lower lung lobes. Do note that the normal trachea moves slightly paramedian to the right distally.

C) SHIFT OF THE HEART
Cardiac displacement occurs towards the side of the collapsed lobe and is another infrequent sign of collapse as it requires a considerable amount of negative pressure to move a structure of such bulk. Note that in a normal well centered and non-rotated CXR, the right heart border should not go beyond the right vertebral shadow.

D) NARROWING OF THE RIB CAGE
This occurs at the side of the collapsed lobe and is a frequent secondary sign of chronic collapse.

An oblique view is the projection taken when the central rays hit any of the body planes at an angle. It is important to know this as a radiologist as also for exam purposes. The views taken are described based on two things: the portion of the body closer to the cassette (right or left oblique) and the location of the cassette with respect to the patient (anterior or posterior oblique).
1) Right Anterior Oblique view (RAO) – The body is rotated so that the right anterior side of the patient is closest to the cassette.

2) Left Anterior Oblique view (LAO) – The body is rotated so that the left anterior side of the patient is closest to the cassette.

3) Right Posterior Oblique (RPO) – The body is rotated so that the right posterior side of the patient is closest to the cassette.

4) Left Posterior Oblique (LPO) – The body is rotated so that the left posterior side of the patient is closest to the cassette. 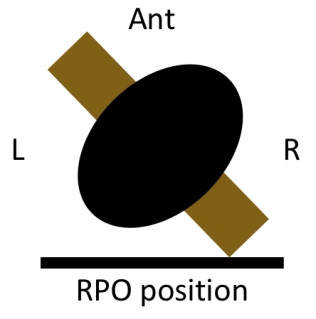 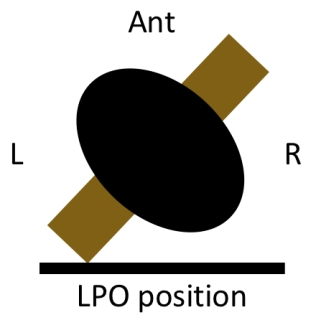 This website is devoted to medical education and practice in radiology. The material in this website is only for medical professionals and is not meant to be medical advice for patients. We are not responsible for republished content from this blog on other blogs or websites without our permission. We are however happy to allow reuse of any blog content as long as we are appropriately acknowledged.

This blog does not share personal information with third parties nor do we store any information about your visit to this blog other than to analyze and optimize your content and reading experience through the use of cookies. You can turn off the use of cookies at anytime by changing your specific browser settings.

This policy is subject to change without notice and was last updated on 23rd Sept, 2018. If you have any questions feel free to contact directly at caferoentgen@gmail.com.